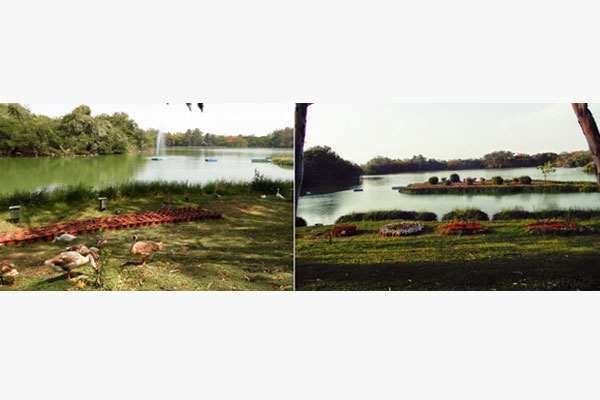 Since the company’s inception, BVG has always adopted ‘quality first’ and ‘innovation’ as its approach to work. In 1999, BVG was small company with a Rs 30 lakh turnover, and got an opportunity to showcase its project execution skills. The campus of TELCO (now Tata Motors) at Pune houses the famous Lake House, the residence of the Chairman of the company.

Mr Ratan Tata was the chairman of TELCO back then and one day he complained that the lake was polluted and was giving out foul smell. Sludge had accumulated in the lake and they company administration decided to clean and desilt the lake. They called in enquiries from external contractors. BVG was handling the housekeeping for TELCO and our team approached the TELCO administration with a request that BVG would like to take up this job.

However, since BVG was a small company with no experience in such work, TELCO was reluctant to even give BVG an enquiry for this work. Eventually, a big contractor got the contract for this work. He came in with a big poclain machine and started to pull out the sludge from the water. The poclain got stuck and to remove that, he got another poclain 10 days later. That too got stuck, and the contractor gave up.

Seeing the problem created by the external contractor, our CMD Mr HR Gaikwad, asked our team to visit the head of civil department at TELCO and request them to give the work to BVG. The TELCO administration asked what equipment, trucks, poclain, etc does BVG possess. The BVG Team confidently told them that BVG does not possess any equipment, but has knowledge, courage and confidence to do the job. This was February and the TELCO administration was still reluctant thinking that if they give the job to BVG and if we are not able to do the job, then it will be a mess in the coming rainy season. They were thinking that if such a big contractor had failed, how would BVG succeed.

But the entire BVG team was confident of its own capabilities. Finally, BVG got the work order in March and TELCO wanted to job completed in 30 days, even before rains set in.

The BVG team started the job with a completely different and innovative approach. We started by first removing water completely from the lake, and then started put in stones into the mud. People laughed at us saying BVG has been asked to remove sludge, but they are adding in stones instead. But that stones were lined up and were meant to create a path for landmoving machines to be taken in. Once the pathway was created, our team moved in with landmoving machines and started excavating the sludge and loading it into tipper trucks.

Then came another problem. While transporting the sludge, all the water used to drain out from edges of the trucks and the sludge used set and solidyfy. It became difficult to empty those trucks at the dumping sites. Even after tilting the tipper, the sludge didn’t fall off and remained stuck. We tried plastic; didn’t work. We tried tarpaulin; that too didn’t work. Then we adopted a frugal approach. After tilting the truck, our boys climbed onto it in half-pants and pushed it down with their legs. The approach worked. We got down to work in speed and started pulling out the sludge trucks after trucks. Soon in three weeks we pulled out over 1500 truckloads of smelly sludge and cleaned the entire lake.

Our quote for the entire work was Rs 13 lakh and we made a good profit in it. We later came to know that the bigger contractor that failed before us had quoted Rs 55 lakh for the same work. This work firmly established our credentials that where others fail, BVG perfectly executes the job. We also proved that knowledge is king and creative approach to work is mightier than raw power.

LATEST POST
Introducing Facilities eConnect: The One-Stop Resource for Latest News, Updates and Products for Facilities Managers
Informa Markets in India Set to Launch UK�s Largest Facilities Show in India from 26-27 November 2020 at Bombay Exhibition Centre
Webinar for Facilities Managers-Navigating to the Next Normal in Workplaces�on Wednesday, 27th May, 4 to 5 pm
'The biggest challenge faced by the industry is to increase the scope of FM services beyond traditional housekeeping services�''
Building intelligence with Smart Building Automation System
Predictive Maintenance Brings New Potential to HVACR Service Market
Coronavirus Prompts Response in HVAC Industry
Biometrics, Smartphones Poised to Replace Key Cards
Webinar Post-Show Report: Navigating to the Next Normal in Workplaces, Held on 27th May
'The biggest challenge is limited awareness and focus towards Facilities Management solutions'
'In the post COVID-19 world, FMs must encourage social distancing at the workplace and design spaces where people can live, work and play safely.
Heathrow Airport transitioning to a lower carbon future with the help of ENGIE
Grindwell Norton Forays into Automotive Detailing Segment with the launch of Norton Car Spa in Indore
Resuming Office After Lockdown : Here is what you should know