Mumbai formerly Bombay, is the capital of the Indian state of Maharashtra and the financial capital of India. With a population of 13,662,885, it is the second most populous city in the world. Along with the neighboring suburbs of Navi Mumbai and Thane, it forms, at 19 million, the world's fifth most populous metropolitan area. Mumbai lies on the west coast of India and has a deep natural harbor. Mumbai's port handles over half of India's maritime cargo.

Mumbai is the commercial and entertainment centre of India, generating 5% of India's GDP and accounting for 25% of industrial output, 40% of maritime trade, and 70% of capital transactions to India's economy. Mumbai is one of the world's top ten centers of commerce by global financial flow, home to important financial institutions such as the Reserve Bank of India, the Bombay Stock Exchange, the National Stock Exchange of India and the corporate headquarters of many Indian companies and numerous multinational corporations

The city also houses India's Hindi film and television industry, known as Bollywood, the biggest Indian film industry which churns out hundreds of Hindi block-busters every year. The media industry is a major employer in Mumbai. Most of India's major television and satellite networks, as well as its major publishing houses, are headquartered here. The name Bollywood is a portmanteau of Bombay and Hollywood. Marathi television and Marathi film industry are also based in Mumbai.

Mumbai's business opportunities, as well as its potential to offer a better standard of living, attract migrants from all over India and, in turn, make the city a potpourri of many communities and cultures.

Bombay islands were captured by the Portuguese.

The islands were gifted in the dowry to Charles II of England.

Charles II gave the islands to the East Indian Company on lease.

Bombay became the H.Q. of the East India Company.

The islands were merged to shape one stretch.

Suez Canal was opened and Bombay developed as an international port.

Bombay was declared the capital of Bombay state.

Bombay was made the capital of Maharashtra.

The name was changed to Mumbai after the goddess 'Mumbadevi'.

The Climate of Mumbai is a tropical wet and dry climate. Mumbai's climate can be best described as moderate temperatures with high level of humidity. Its coastal nature and tropical location ensures moderate temperatures throughout the year, average of 27.2°C and average precipitation of 242.2 cm (95.35 inches). The temperatures in average are about 30°C in summer and 18°C in winter. Mumbai experiences 4 distinct seasons Winter: (December-Feb); Summer: (March–May); Monsoon (June-Sep) and Post Monsoon (Oct-Dec).

The culture of any place is always determined from its people, religion, language, cuisine and festivals. Mumbai has an assortment of people from various communities and subsequently they follow different religions. Since the metropolitan is observing modern trends, here people enjoy participating in all festivals irrespective of caste, creed and color. Another reason could be the influence of Bollywood, where a potpourri of multi-ethnic culture is observed. The cultural heritage of Bombay presents a combination of old and new. The people of the 'Film City of India' seek to follow the hip-hop lifestyle of the celebrities residing here. The 'bindaas' or carefree approach of the Mumbaikars comes alive in their dialect of Mumbaiya Hindi too. 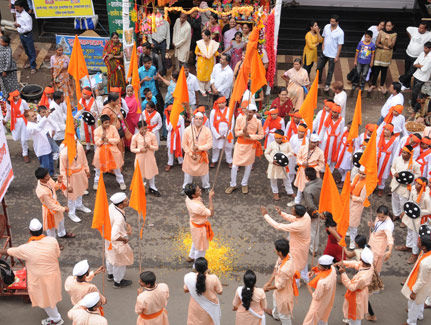